Santorini today has a population of 15.500 inhabitants all year around and a land area of 76 square kilometers The capital of the island is Fira.

In the summer time more than 25,000 people are coming for summer jobs on the Island. We have a birthrate of around 150 every year, probably the highest in Greece.

Santorini Greece’s most visited island, receiving up to two million tourists annually — many arriving on the cruise ships that can normally be seen parked in the middle of the natural bay below by Fira Port! 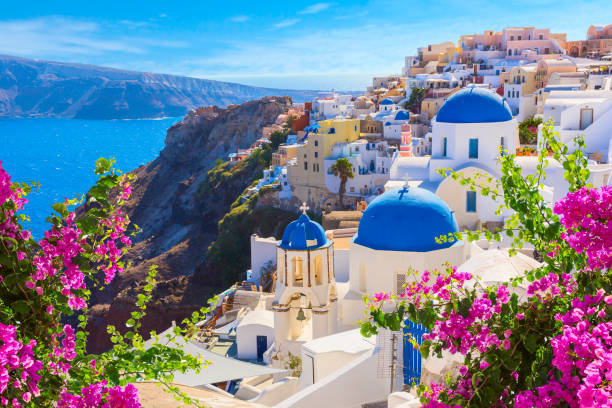 Santorini is the southernmost island of the Cyclades group. Its soil is volcanic and rocky at the end where the volcano is located. The island has a wealth of archaeology that includes the Ancient city of Mesa Vouno and the prehistoric settlement of Akrotiri.

Santorini’s culture includes a unique vernacular architecture, best exemplified by the settlements of Vothonas, Messaria, Finikia, and Megalohori and the advanced fortified settlements of Pyrgos, Emporio, and Akrotiri.

The island’s moderate climate is due to its exposure to northeasterly winds, while winters on the island are temperate with average temperatures in the region of 10oC. Rainy winters alternate with dry summers, and the fertile soil is ideal for the cultivation of vines and tomatoes. The island has meager freshwater resources and few wells.

Santorini has a population of 7,000 concentrated in roughly 10 villages. Fira, the capital, and Oia, one of the prettiest villages in the Cyclades, are renowned for their sunsets. The “black” beaches with the sheer cliffs and the volcanic soil add to the island’s unique landscape.

Known in antiquity as Strongili because of its round shape, the island was transformed by a volcanic eruption in the 15th century during which its center sank, forming the caldera. The Phoenicians named the island Kallisti, or most beautiful, and the Dorians called it Thira. 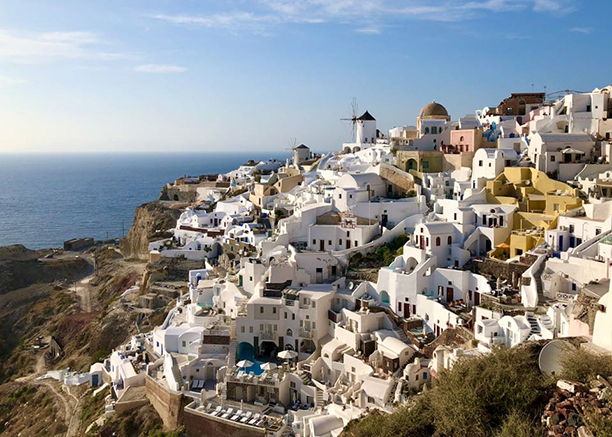 The name Santorini dates from the 12th century and is a relic of Frankish rule when it was known as Santa Irini. Minoan culture flourished on the island until roughly 2000 B.C. when the island’s development was halted by a volcanic eruption.

According to historical sources, the eruption darkened the entire Aegean, scattering ash and creating 250-meter high tidal waves that traveled with speeds of 300 kilometers per hour and washed away cities on Crete and Egypt. In some myths, Santorini is identified with the lost continent of Atlantis.

Thira came under Persian rule and later allied itself with Sparta, although in 426 B.C. it passed under the hegemony of Athens. It was subsequently conquered by the Ptolemies and later the Romans.

During the Byzantine era, Thira was a part of the Aegean Sea Province, or Thema, then later became part of the Duchy of Naxos before falling to the Venetians. The latter period is marked by the conversion of large segments of the population to the Catholic faith. In 1537, the island fell to Barbarossa’s pirates and in 1579 was taken by the Turks. From 1770 to 1774, it was under Russian rule and in 1832 became a part of the newly formed modern Greek state.

Good Friday: At the village of Pyrgos, locals ignite hundreds of tins stuffed with petrol-soaked rags as the Epitaphios is carried in procession through the village. The extraordinary sight is visible around the island.

The burning of the Ovrios: On Easter Sunday, many villages organize mock popular courts that sentence to death, and then burn in effigy, the Ovrios (a rag doll in human form).

Paniyiria: Santorini is renowned for its paniyiria, folk festivals combining the observance of religious feast days with a communal feast featuring food, wine, and music. Islanders are faithful in their observance of these customs, which is in keeping with their devotion to the church and its traditions. Some of the most popular paniyiria are listed below:

Feast of Sotiros at Pyrgos: According to custom, youths steal potted basil plants from the gardens of households with young women and use the plants to decorate the church yard.
Ayios Yioryis “Sfouggatas” at Firostefani: Local tradition holds that the saint wished for his feast to be observed with the preparation and sharing of the kamponosfouggato, an omelet made with kampounes and other wild greens.
“Ayioi Eftapedes”: Located on the caldera’s rim about midway between Imerovigli and Oia, this small chapel is only accessible by boat.
On the feasts of Panayia Myrtidiotissa at Kamari, Panayia Platsani at Oia, Stavros at Emporio, Profitis Ilias, and on the Assumption of the Virgin on August 15, folk festivals are organized after religious services with food, wine, and dancing.

Most popular Activity in 2022 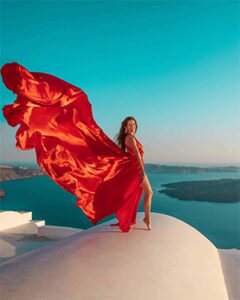 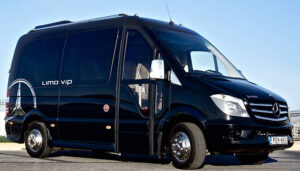 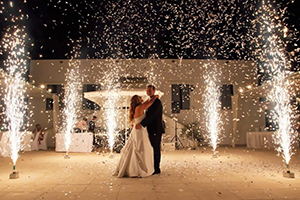 Wedding Fireworks is one of the best event moment See More